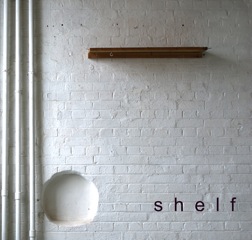 Originally, this exhibition/exercise took place in London March, 2010, with over 50 international artists participating.  Each artist had been asked to create a work which deals with, rests on, engages with, speaks about, or actually is, a shelf.  For the Whitstable Bienalle, the organizers of this project have expanded it to include the work from various artists in the Whitstable area.  The end result will be a new installation where all the artworks will be forced into very tight confines, creating one large conglomerate work with a variety of microcosms within.